The blog has been woefully neglected in the last few months, so here is a quick update: 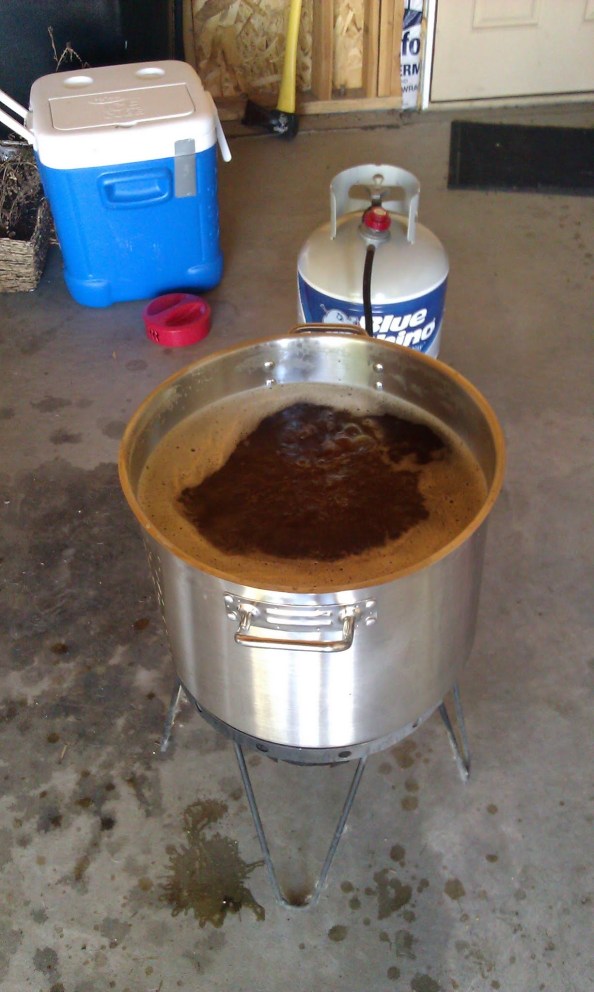 We're still at it!

Yes, we are still brewing up a storm. Since the last brewing update, we sampled the “API Lepirt” Houblon Chouffe Clone and our “Farmhouse Eleven” Saison, both of which turned out very well despite a fairly high final gravity. We were still learning about pitching rates and proper attenuation at the time and assumed that one Wyeast smack-pack would do the trick for any beer.

The St. Bridget’s Stout also turned out quite well and the cocoa nibs imparted a very smooth, chocolatey taste to the beer. It may have been even a little too sweet because, once again, the final gravity was around 1.025. A fuller attenuation would have dried out the mouthfeel considerably, I think. In any case, my colleague Bridget loved the beer and was super-flattered that we named the beer after her.

We regressed a bit in our next batch. Liles wanted to make something “quick and easy,” so he chose a Nut Brown Ale kit from Northern Brewer. It wasn’t terribly interesting to brew, so we kind of missed the fact that we used distilled water instead of spring water for the whole process. The beer ended up tasting OK (pretty much like a Newcastle), but it is weird to see a beer foam up out of the bottle, then have the head completely disappear within seconds. Not a great effort, but an interesting learning experience, nonetheless.

If any beer hammered home the lesson of yeast pitching rates, it was our next effort. Jeff decided that he wanted to brew a Strong, Dark Belgian Ale and age it on bourbon-soaked oak chips. We chose Northern Brewer’s seasonal Golden Dragon kit and dubbed it “Jeff the Magic Dragon.” This is a very high gravity brew, with lots of late extract additions, as well as an addition of a pound of beet sugar at high krausen. It isn’t surprising that this beer had a tough time getting started since, again, we used a single smack pack. Jeff ran out and got another smack pack the next day when he saw there was zero activity in the fermenter and ended up saving the batch for the time being. We finally got the krausen going with the extra yeast and were able to add the candi syrup.

Jeff also bought a bottle of Stranahan’s Colorado Whiskey and some medium toasted oak chips for the bourbon-barrel effect we were looking for (this is now one EXPENSIVE batch of homebrew). After allowing the Magic Dragon to condition for a few weeks in primary, it was racked into a glass carboy for the long secondary fermentation. A few weeks later, the bourbon-soaked chips were added. We thought it would be a good idea to rack the beer again to help clarify it a little, but this may have been a big mistake in retrospect. We bottled the beer, using our normal amount of priming sugar, then waited a couple of weeks. Right out of secondary, the beer tasted very good, with a boozy heat backing it up, so we were excited to taste the final product.

Two weeks later and . . . the beer was still flat. There is a tiny hint of carbonation in the mouthfeel, but we were expecting a much fuller head, or at least some visible carbonation. While this is disappointing, at least it still tastes very good and, with some more aging, could end up being a Lost Abbey Angel’s Share type of beer (maybe not quite as good, though). I think the lessons to take from this batch are:

If we were to attempt this beer again, we would probably also re-pitch with a packet of yeast at bottling, like you would with a Trappist beer.

Anyone else have similar struggles with brewing big beers? I’d love to get some words of wisdom should we attempt this recipe again.

Up next: Building a better starter and the move to all-grain brewing.

Since my last post, a lot has happened. Most significantly, Megan and I got engaged out in San Diego, where we were vacationing after a family wedding. We’re both awfully excited! This is, however, a beer blog, so I’ll try to focus on the beer and brewing happenings of the last month.

The Farmhouse Eleven turned out rather well. Early on, it was a little green and had a very prominent banana/bubble gum aroma to it, but it has since settled down and is tasting closer to what I expected. The old home brewer adage that “the last two bottles in a batch taste the best” seems to apply in this case. Overall, it’s a nice, refreshing summer beer. The reviews so far have been pretty good, although I prefer our first beer, which was excellent right out of the gate.

From May 19-25 Meg and I ventured down to Southern California for my cousin’s wedding, and to check out some of San Diego’s awesome breweries. After the wedding in Malibu, we drove down to Carlsbad, home of one of the Pizza Port brewpubs, and an easy drive to Escondido and Stone Brewing. After spending some time on the beach, wandering END_OF_DOCUMENT_TOKEN_TO_BE_REPLACED

It’s been a busy (but awesome) month. I’ll get a new post up tonight. I went to the Great Divide 17th Anniversary party last weekend, so I’ll share this: 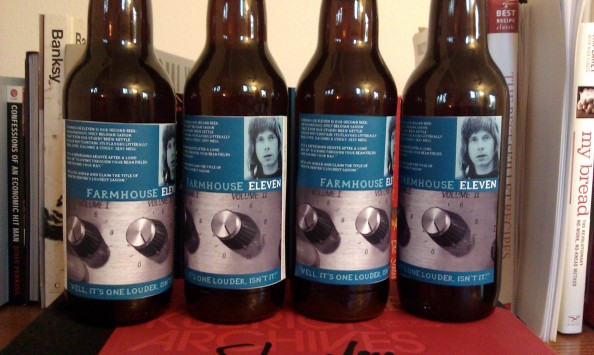 I changed the label a bit by taking out the color out of the movie screenshot and altering the quote on the bottom to be more accurate (yes, I am a dork).

Now more faithful to the film!

Fellow internet beer geek and independent music aficionado Zac Early, wrote up a nice post about beer labels and album covers the other day. You should check it (and the rest of his blog) out here. He has created some pretty cool labels for his own homebrews. A favorite of mine is the one he made for his “Big Black Bitter.”

Last weekend, we bottled our Farmhouse Eleven at Jeff’s place. We tasted a sample and the flavor seemed to be on track. The final gravity was about 1.020, which will give it an ABV of 6.19%. We used a combination of 12 oz. bottles and 22 oz. bombers this time and, as it turns out, we had just enough to divide evenly three ways.

Once the bottling was finished, we packed up Liles’ share and headed up north to Longmont for some “research.” We gathered at Liles’ house with our significant others and piled into the Lipe-mobile. Our first destination: the Left Hand tap room.

END_OF_DOCUMENT_TOKEN_TO_BE_REPLACED

A lot has happened since Nookie Day. We realized that a 40 beer yield does not translate into lots of beer for everyone. I’m down to my last four bottles of Nookie after our “release party” bacchanal and giving out samples to friends and coworkers. It’s cool though, since the reviews have been pretty good so far. I gave a bottle to DJ and John over at Little’s liquor store, my local beer purveyor, hoping for some constructive feedback. They liked it so much, that they put it on their “Wall of Fame,” which is made up of beers they love, but can’t sell. It’s pretty flattering for the Nookie to be lumped among New Glarus and Bell’s. Our empty bottle now sits next to Bell’s Two-Hearted Ale behind the register. Since I’m the beer-buying equivalent of what casinos call a “whale,” I hope they just weren’t being nice, but I think they genuinely liked the beer. END_OF_DOCUMENT_TOKEN_TO_BE_REPLACED

Six weeks after we started, we finally got to taste our first batch of homebrew. Meg and I hosted the event at our place, where we would also be having Easter dinner. I think we were all a little nervous about how it would end up and I was fully prepared for the possibility that we’d have to let the beer condition in the bottle for another few weeks.

I opened the first bottle and was relieved to hear the hiss of escaping CO2. I poured the beer a little aggressively, in case there wasn’t enough carbonation. Turns out that wasn’t necessary, since the pour produced a huge, fluffy head. So far, so good. END_OF_DOCUMENT_TOKEN_TO_BE_REPLACED

On the same day we bottled the ‘Nookie, we got going on our third beer, the Houblonmonstre Tripel IPA kit from Northern Brewer. They describe the kit like this:

Once upon a time a poor homebrewer was lamenting the lack of time that the modern world allowed him for his hobby. He had the ingredients for a batch of Tripel and a batch of IPA, but the demands of home and work life were such that he had no opportunity to brew them, and so he cried himself to sleep. While he slept, a collective of Ardennes Forest Beer Gnomes (Houblonmonstres, in Flemish) came into his house and took pity on the poor homebrewer. They decided they’d brew his beer for him. Unfortunately, the Gnomes were already three sheets when they broke into his home, and so they combined the ingredients for the two batches. This recipe is the result of their drunken meddling: an elegant and pale strong abbey ale carpet-bombed with American and continental hops. You’re going to have to do the brewing yourself, though.

Pretty cool to picture a bunch of drunken gnomes making beer, especially since this is a tribute to Houblon Chouffe, a very tasty and strong beer. Liles and his wife Brandi, however, thought that a strong Belgian should pay tribute to the most famous strong Belgian of all, which is why we are calling it:

END_OF_DOCUMENT_TOKEN_TO_BE_REPLACED

Well, we bottled our IPA about a week ago, but I didn’t get a chance to post until now.

Bottling went pretty well, considering that most homebrewers find it to be a major pain in the ass according to what I have read. Having three people probably helps. Anyhow, we made a day of it. Before bottling our IPA, we racked our Saison into secondary fermentation. Jeff bought a cool beer thief/test tube contraption that helped us to take an accurate gravity reading. 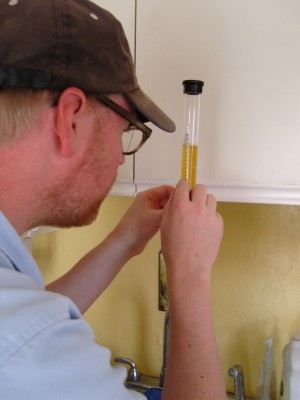 I'm not a scientist, but I play one in Jeff's kitchen

The saison had a final gravity of about 1.01, which is about on target for what we wanted. We stole a taste after the reading and the flavor seemed right on. After an additional month of conditioning, I bet it will taste pretty awesome. END_OF_DOCUMENT_TOKEN_TO_BE_REPLACED

On the same day we racked our ‘Nookie IPA, we started working on our second beer, a Belgian-style saison, otherwise known as a farmhouse ale. Jeff picked out the kit from Northern Brewer. All three of us are fans of the style and, with warmer weather approaching, this seemed like a good choice. We are calling it:

The label for our second beer (click to enlarge)

Here is how the first day went down:

After racking our IPA, we got started on brewing the Farmhouse 11. It went pretty smoothly at first. We steeped the specialty grains, just like we did with our IPA, then got up to a full boil. We cut the heat, then added the malt extract (6.3 lbs Gold Malt Syrup and 1 lb Gold Dry extract). We got the wort back up to a boil and added the first half ounce of hops, which led to: END_OF_DOCUMENT_TOKEN_TO_BE_REPLACED